Engravers from Manchester: Our staff collectively have over 100 years of engraving experience, so you can rest assured you will receive a professional, efficient service and a high quality job.

We have the full array of Engraving machinery, including Manual Pantograph Engravers, CNC Engravers and Laser Engraving Machines.

Our engravers are trained to the highest standards in the uk enabling them to meet any of your engraving requirements.

Established in Manchester in 1880 (read our History below) and still going strong, providing a level of quality and service that others simply cannot match ... 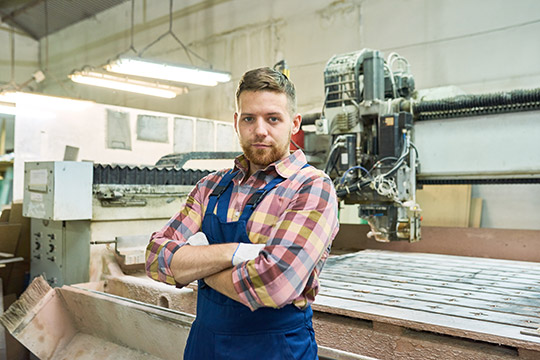 The Manchester Rubber Stamp & Flexible Type Company was founded in 1880 by Walter Edward Hughes a chemical merchant whose premises were at 68 Tib Street. The firm originally sold only rubber stamps and ink but later diversified into stencils and general engraving.

In 1920 A. Schofield, a stockbroker, took over the company in partnership with H. Radford and seven years later in 1927 the business moved to new premises, Tower Works, at 26 Withy Grove. Like many other Manchester firms the business suffered the problem during the Second World War caused by the loss of staff called upon for military service and also from difficulties arising from wartime shortages and restrictions. Windows and doors at the Tower Works were blown in during the Manchester blitz - but the firm survived these small 'inconveniences'.

A. Schofield died in 1948 and his son J. C. Schofield then joined the company; H. Radford retired in 1953. The firm remained in the ownership of A. Schofield's son and his widow Alice until 1981 when J C Schofield purchased the balance of the shares to become the sole owner, running the company until his own eventual retirement in 1999.

Geoff A. Hewitt, the business' present owner, began his working life with the firm on 8th April 1963. Incidentally, that was also the day that saw Ivy Sinclair begin a long and loyal career as company secretary with the firm. She finally retired in July 1988 after 25 years service. Geoff ran the firm's engraving section from 1970 before becoming a director in 1991.

The business moved from the Tower Works to its present location at 63 Red Bank in 1971 but retained a shop, showroom and distribution depot at 44 Shudehill.

In a grim echo of the blitz 1994 saw a fire in the workshop which set back production for some time. Geoff Hewitt was first on the scene and had to sleep on the fire damaged premises for ten days until they were secure.

Throughout the period since Geoff Hewitt became a director there has been a gradual falling off of the rubber stamp business and tremendous increase in the engraving side of the firm's activity, especially since computer technology has been installed. Engraving now comprises 70 per cent of the business.

According to Managing Director Geoff Hewitt, the firm's main selling points are 'quality, fair prices, the personal relationship we have with customers and the fact that no job is to large or small.' The firm's mission statement is 'quality, quality, quality' an aspiration likely to be consistently met by the business' technical superiority, a lead maintained by keeping both abreast of the times and ahead of competition with the latest machinery and innovative staff.

Whilst still retaining the old, skilled manual way of engraving, new computerised engraving systems, including the latest laser technology, allows the Manchester Rubber Stamp Co or 'MRS' to achieve a more accurate standard of work than the old method. MRS however continues to offer both services.

Geoff Hewitt is proud of his firm's progress and range of products remarking that using computerized engraving equipment and AutoCad drawing packages we can produce everything from company logos to complex mimics using the best quality material such as stainless steel, brass, anodised aluminium, Traffolyte, Formica and Perspex.

Under Geoff Hewitt's leadership, helped by his son Alex and daughter Jill, together with works foreman 'Sid' Lawrence Reid, the firm has become a modern thriving business but one which in the future intends to carry on as it always has done - providing quality products at competitive prices.

Traditional virtues do pay; as Geoff Hewitt rightly remarks 'There has always been competition in our industry but most have bitten the dust, whilst after more than 120 years we are stronger than ever!'

What our clients say...

Thanks for the time, workmanship & commitment for the work you have done which will enhance the cadet experience & contribute towards their development.

Thank you very much for your excellent work in producing our centenary sponsors' plaques and the plaques for the official opening of the physics centre by Professor Brian Cox.

On behalf of the British Red Cross, I Would like to thank you for your donation of the plaque that accompanies our newly-erected trophy cabinet.

On behalf of everyone at our church can i offer you sincere thanks for the new notice board. The board is now up and it looks absolutely superb.

The Church of The Most Holy Trinity

Twice I have used this company for urgent requests where I've needed the stamp for the following day. They haven't let me down!

The Manchester Rubber Stamp Company does exactly what it says on the tin - they produce bespoke rubber stamps for every imaginable purpose.